So in February my dog went Blind.

He has a disease called Cushing’s disease which causes sudden blindness in dogs. One day he just started running into things, and now he does it all the time. The technical term is, Sudden acquired retinal degeneration syndrome (SARDS).

He’s coping ok, and it’s not going to adversely effect his health beyond his eyesight and some lethargy. I hope to still get him out and hunt, but obviously in a more grassy environment, not so grouse woodsy. Downed trees and briars would not be fun for a blind dog, can you say headache?

To make dealing with it a little easier I named a little tune after that whole scenario and I recorded a video of it last night on the back porch.

It’s simple, easy, no frills, but fun to play. It’s the kind of thing you play and people ask, “what is that?” and you say, oh just something I made up. But now days, those kinds of songs don’t often get written down or recorded. It has lyrics but I didn’t sing them in this version.

My old dog he can’t see,
He runs into the old oak tree.

That’s it. Simple and Old School.

Who Dey Nick – Getting his sleep on.

Just got this link from a friend. Our thoughts and prayers go out to Doc and his family. Get well soon, there’s more picking to do.

RALEIGH, N.C. (AP) — Grammy-winning folk musician Doc Watson is in critical condition at a North Carolina hospital after falling at his home earlier this week.

His daughter Nancy tells The Associated Press that the 89-year-old fell at his home in Deep Gap on Monday. She says he didn’t break any bones, but he is “real sick.”

He was in critical condition at Baptist Hospital in Winston-Salem.

The blind singer and guitarist has won several Grammys, including a lifetime achievement award. He also received the National Medal of the Arts.

He’s known as a master of the flatpicking style of guitar playing and for starting Merlefest, an annual gathering of musicians named after his son, who died in a tractor accident in 1985.

Some years ago I did the album cover and layout work for Tim Carter’s solo album Bang Bang, as well as the logo for his record company and recording studio Tree-O-Records in Goodlettsville TN. He has good tunes on the record and the studio has some great talent working there all there time. Tim is also a Fly Fisherman, and I mentioned him in my article for Gray’s Sporting Journal last year, so he has a special place in the heart of the Fiddle and Creel Hall of Fame.

I haven’t mentioned much about the legendary Earl Scruggs’s passing, mainly because there just wasn’t much for me to contribute that hadn’t already been said. Everytime I’d start to type something, I’d get so bummed out, I’d just delete the shit.

Tim and his brother Danny will be performing at the Hog’s Breath Saloon in KW starting June 25th so if you’re down there on the tail end of the Tarpon migration, or you’re chasing bones or otherwise in need of good old fashioned banjo blitzing, go see them! They are well worth the price of admission, you will not be disappointed. Tim also plays the heck out of a mandolin too.

The Mandolin Cafe is streaming some tracks from the new Joe Craven Trio album. It’s worth a listen. If I’m not careful, I may get cited by the Bluegrass Police for this one, it’s a little outside the genre. OK so maybe a little is an understatement, but Joe Craven can play some Mandolin, in addition to mouth percussion and all that crazy other stuff he plays like the Jawbone (see video below).

This new album is a nice jazzy mandolin centric effort.It’s hard to categorize for obvious reasons, it’s Joe Craven, the Bluegrass equivalent of a spider monkey. It stretches out in places and remains compact and tight in others. It’s a nice mix of styles that holds together as a single album nicely, like a crazy pair of patchwork pants hanging on a dancing hippy’s hips, you’re not quite sure how they are staying up and sewn together but by golly they do! It’s a nice surprise.

My favorite track so far seems to be Monkey Biz which sounds like Jethro Burns jamming with Chick Corea, which are two sounds I never thought would go together, but hey,why not!

In the tune Sloppy D he does his whole “bend the neck of the mando to get a whammy bar effect.” When I saw him do that to what looked like a Loar, I almost crapped my pants right there in the front row, that takes some cajones. It literally made me sick to my stomach, but it didn’t break.

Go take a listen, in the meantime here’s a video of the jawbone… house concerts are priceless, if  a bit awkward. Been there done that, gave the t-shirt to goodwill. 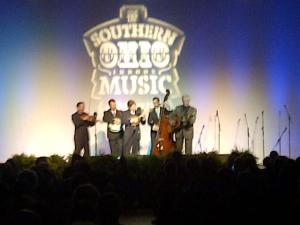 This weekend marked the March edition of the semi-annual Southern Ohio Indoor Music Festival. I unfortunately did not have the pleasure of attending the weekend’s festivities but a good friend and musical cohort of mine did. He passed along a cool image of the Del McCoury Band gettgin it done on stage in front of a beautiful logo designed by yours truly.

Back when this festival first started, not too long ago, I had the honor of designing the identity and logo for acquaintance and festival founder Joe Mullins. The festival has really grown and now in aditiion to brochures t-shirts, hats tickets, etc the logo gets used as a gobo behind the musicians as they play! How cool is that?

A big thanks to John Banjovi for the pic! Wish I could have been there.

Wow talk about right up our alley, this sounds pretty cool. I’m not sure how I missed out on this last year? Even if I don’t win the tix, and there’s a better than not chance of that, I’m going to this little shindig. See below, I can’t wait to record my video!

Legendary flat-picking guitarist Larry Keel and his band Natural Bridge are gearing up for a second year of the West Virginia mountain retreat weekend called Trout and Tunes, up at the Elk River Inn in Slatyfork, W.Va.
And if you’ve got some fishing and picking game you can join them for free.
To prep for the epic weekend of fishing, picking and chilling, Keel, the guitar legend and master fisherman, is offering up a contest to create an original song on why you should be the guy who gets to go on the Trout & Tunes 2 roster for free.  First prize is admission for two for the weekend for Trout and Tunes 2 (value is $300 each) with all meals, fishing excursions, includes picking sessions. Runner-ups will get weekly prizes including CDs, T-shirts and other Larry Keel merchandise

Here’s how: make your own, original video of you singing and performing a song about why you should get the complimentary passes, post to Larry Keel’s Facebook wall with the URL to your YouTube video and share it on Facebook, twitter.  Five videos with the most views by March 23 go to the ‘finals’  where they’ll be another round of voting.
Do your best to come up with a song, play a cover, create your own lyrics to why you should be ‘the one’ who gets to pick with Larry & Jenny Keel & Natural Bridge over this intimate weekend in West Virginia’s natural bosom.

If you can’t come up with an original song, feel free to upload a video of you playing one of your favorite songs. All videos should be under four minutes.

The judging is based on numbers of views on YouTube, so it needs to be posted as a video to YouTube. Email office@larrykeel.com when your submission is completed/video is posted and post to Larry Keel’s Facebook page wall.
Trout and Tunes 2 runs May 17-20 at the Elk River Inn, Cabins & Restaurant located in the high peaks of West Virginia, join Keel & Natural Bridge and friends for three days of instruction, small concerts, incredible food and lodging. Learn and enjoy fly and spin casting for trout, hiking and mountain bike trail right out the door or just relaxing with a cold beverage near the campfire.
Regular cost for Trout and Tunes 2 weekend is $495 plus tax farm house 5 bedrooms share 3 baths / $595 plus tax Private Inn room with private bath or groups of 3-6 private cabins
Keel, who has recorded and performed with such talented and diverse artists as Keller Williams, Yonder Mt. String Band, Trombone Shorty, Dirty Dozen Brass Band, Bela Fleck, Tony Rice, Sam Bush and Chris Thile, is set to release his 9th CD, “Classic” on Tuesday, March 20.